During the 1950’s, a community of small houses were built around the circle, sprinkled amongst the large oak trees. These houses were originally built for workers at the hospital. Later, it is said that the houses were used for patients who needed to be close to the hospital, but were able to live on their own. In 1990’s, the houses were no longer used, and they were removed from the property in early 2000’s.

Kendall Circle is now informally and unofficially used by the citizens of Raleigh as a park. It is mistakenly assumed by most who use it that it is a part of the Dorothea Dix Park, rather than it being a part of NC State. Kendall Circle is seasonally used for criterium cycling races, is on the circuit of various city running races and marathons, and people from all over come to walk, jog, ride bikes and play with their dogs on the loop.

Kendall Circle is a special place and has a character that is uniquely different from almost all of Dorothea Dix Park. The main difference is that the circle is heavily wooded with large oak trees. The trees are much more numerous than most of Dix, making it feel like a large hardwoods forest rather than the dappled pastoral quality of the park. The amount of wildlife living and using Kendall Circle is astounding—from deer and fox to owls and hawks.

Some of the uniqueness of Kendall Circle includes: 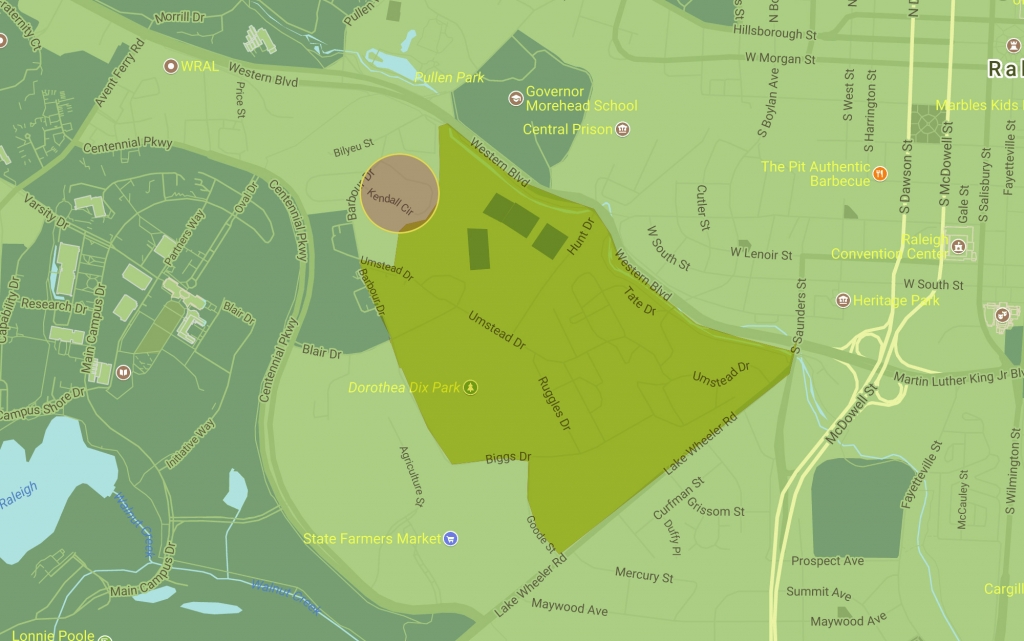 Although Kendall Circle is supposedly not under threat of development, there has been contradictory and changing descriptions of intent for the area.

Character Places, page 14
This area of significantly large oak trees is a park-like open space for passive recreation and serves as a buffer to the adjacent Pullen Park Terrace neighborhood. Development of any amenities in this area must be consistent with the Shared Open Space concept and preserve the trees and vestige of road remaining as a pedestrian/bike trail. A pedestrian link from this road to Rocky Branch Greenway along Western Boulevard will be provided as this area of campus develops. In addition, a pedestrian and bike link will be provided from Kendall Circle Park across Centennial Parkway.

More than two-thirds of Centennial Campus land is designated as open space and is not intended for building development. The configuration and connectivity of this open space is a primary defining characteristic of the campus…In addition to the campus courtyards serving campus buildings, there are three planned open spaces east of Centennial Parkway at Spring Hill: the tree grove at Kendall Circle, the conservation area associated with the Walnut Creek tributary, and the open space with a view of downtown Raleigh that will be created from the parking lot adjacent to the Council Building.

The McAdams portfolio page on the subject, titled “Rezoning for More Vibrant Opportunity” does give some insight as to to the intentions of the Centennial Campus Spring Hill District as a whole:

McAdams is assisting North Carolina State University in the planned development rezoning of 130 acres of property located on their Centennial portion of campus in Raleigh. The property is directly adjacent to the 308-acre Dix property owned by the City of Raleigh, which will become a regional public park. The rezoning of the Spring Hill property will enable NCSU to implement a highly intense mixed-use development within this portion of campus. This entitlement provides NCSU with a form-based design approach that allows for a greater variety and intensity of uses throughout this area.

In February, 2018, an official survey was completed of Kendall Circle and all or most of the Centennial Campus Spring Hill District, upon request from NC State.